Tax Relief » Can the IRS Garnish Wages? Everything You Need to Know to Protect Your Money 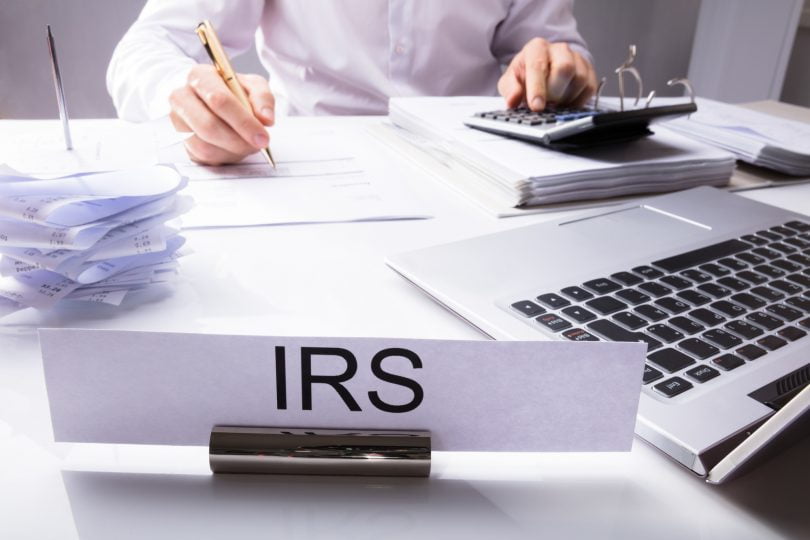 Think you can put off paying your tax bill? Think again. You can’t default on tax debt – the IRS has many conniving ways of getting what it’s owed.

Can the IRS garnish wages? Yes.

Fortunately, the IRS doesn’t jump from one unpaid tax bill to tax garnishment. You have other options before the agency comes for your paycheck.

How IRS Garnishment of Wages Works

For other creditors, like your credit card company or auto loan lender, the bank needs to go to court to ask for wage garnishment order from the judge. The same process may apply if you participate in a lawsuit and must pay a summary judgment to the other party.

There are only three cases where a court order isn’t necessary for wage garnishment:

So, how does the creditor or IRS take money from your paycheck?

When the creditor has the authority, it asks your employer to withhold a specified amount of money from your paycheck. Your employer then sends it directly to the party that requested the wage garnishment. The practice continues until you pay off your debt.

In the case of the IRS, the bureau sends your employer a wage levy. Your employer will then give you a copy of the notice including an exemption claim form. You’ll then complete and return the form and hope for the best.

How Much Money Will the IRS Take?

The IRS will take at least 25 percent of your take-home pay, which is more than other creditors.

Of course, the IRS leaves you with some money, but it may not be enough to survive on if you have a significant amount of other debts.

The IRS will continue to take this money from your paycheck until you pay back your debt plus the interest and penalties.

You Receive a Notice of a Wage Levy – What Now?

The IRS wants a chunk of your paycheck – what do you do now?

Your best option is to avoid wage garnishment at all costs. It is less expensive to agree with the IRS before you reach that point.

Fortunately, the IRS can’t just take your money. They first demand payment for the taxes you owe and only proceed if you don’t respond. You also receive a final notice 30 days before the agency starts to take money.

The final notice is the time to act. Keep in mind that the IRS doesn’t relish in garnishing your wages. It’s an expensive bureaucratic process that is unpleasant for everyone.

The Best Things to Do to Avoid Wage Garnishment

Your best option is to reach out to the IRS and offer to pay.

Paying off all your debts is the only way to get them off your back entirely. If you can borrow money from a creditor or sell an asset, then this is the time to do it. Borrowing money as a loan is almost always easier than paying the IRS penalties and interest.

If you can only borrow or pay part of the total sum due, talk to the IRS.

It is difficult, but not impossible to compromise with the agency. To do this, you’ll need a superb tax attorney with negotiating experience. You will also need to have filed all your income tax returns from previous years.

Alternatively, you can ask the IRS for the option to pay in installments. The IRS would rather get their money sooner than later, and installment agreement allows them to collect on their terms. IRS installment plans typically last three years, which may less time than they collect your wages.

You don’t need perfect credit to ask for a payment plan. As long as you haven’t previously defaulted on your debts, then you may see success with this plan of action.

Can I Get Relief from the Debt?

You’ll pay taxes to the IRS sooner rather than later in almost all cases.

There are only two options for seeking some relief.

First, the IRS allows you to get in touch and explain the economic hardship the levy on your wages causes. If they agree, then the IRS may release the wage garnishment.

It will not, however, relieve you from the balance. Instead, the IRS sets up a new payment plan to help you pay off the balance without leaving you homeless.

Bankruptcy won’t relieve your tax burden. It will stop the wage garnishment temporarily. They will resume again once the bankruptcy is final and you get a new job.

How to Bargain with the IRS

Sooner or later, you will pay at least part of the tax debt owed. Quitting your job or filing bankruptcy won’t eliminate the problem.

The IRS, and any decent tax attorney will always recommend working with the IRS rather than trying to run from them.

To prepare to bargain with the IRS, make sure you filed returns for every tax year. You should also arrange to audit your financial situation including debts and assets to discuss with the IRS agent.

Finally, if you wish to pursue the Offer in Compromise route, use the IRS’s pre-qualifier tool to see whether you can apply to pay a smaller amount. It’s open to U.S. residents.

Finally, don’t try to hide anything and don’t go it alone. Hire a tax accountant and tax attorney to ensure you get the best deal possible.

Can the IRS Garnish Wages?

The answer to the question “Can the IRS garnish wages?” is yes. Unlike other creditors, the IRS can take huge chunks of your paycheck and do it without a court order.

Do you owe money in back taxes? Don’t let it reach wage garnishment. Click here to learn more about tax debt relief.